The Jaguar I-PACE has demonstrated its real-world usability by driving 229 miles (369km) from London to Brussels on a single charge.

Monday 17 September, Whitley: The Jaguar I-PACE has demonstrated its real-world usability by driving 229 miles (369km) from London to Brussels on a single charge.

The all-electric performance SUV began its intercity trip on London’s South Bank, with its 90kWh battery fully charged, before heading to the Channel Tunnel terminal at Folkestone. But unlike the 80 million vehicles that have made the crossing by train since the Channel Tunnel opened, the I-PACE travelled the 50km through the world’s longest undersea tunnel using its own power.

After emerging into the Calais sunshine from the service tunnel which runs between the two rail tunnels, Stephen Boulter, the Jaguar engineer behind the wheel, headed east and arrived at the historic Mons Des Arts in central Brussels with eight per cent battery charge still in reserve.

We know customers won’t compromise on everyday usability so we engineered our electric performance SUV to deliver outstanding real-world range. By driving the 229 miles (369km) from London to Brussels on a single charge – and arriving with plenty of range left – we’ve demonstrated how comfortably it deals with long-distance journeys. 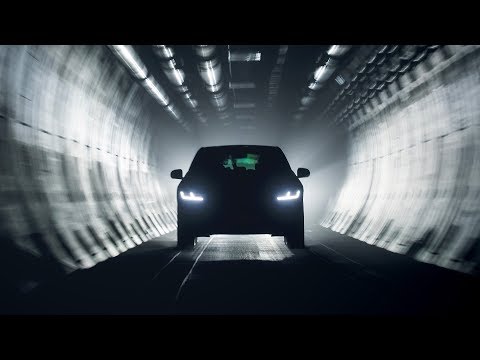 As part of the challenge, the I-PACE cruised along motorways and negotiated rush-hour traffic in the summer heat to reach the Belgian capital.

To ensure that drivers get the most from each charge, the I-PACE is packed with technologies to optimise energy efficiency.

Before the journey begins, pre-conditioning can automatically heat or cool the battery to reach its ideal operating temperature and set the cabin to the desired temperature. Using power from the grid to do this instead of drawing current from the battery is more efficient and maximises range.

The navigation system takes account of route topography and driving style to calculate range on any given journey and can plot the most energy-efficient route available. It will also alert the driver if the programmed destination cannot be reached and will help to find charging stations within range – using a 100kW DC rapid charger can add up to 100km of extra range in just 15 minutes.

The I-PACE’s state-of-the-art 90kWh Lithium-ion battery offers sports car performance of 0-60mph in 4.5 seconds alongside the practicality of a 292 mile range (WLTP cycle) and 0-80 per cent charging time of 40 minutes (100kW DC). Home charging with an AC wall box (7kW) will achieve the same state of charge in just over ten hours – ideal for overnight charging.

The instrument cluster can show how much energy certain systems, such as climate control, are using, and how much range could be gained by switching them off. If equipped with four-zone climate control, the Smart Climate feature uses the restraint system’s sensors to determine how many people are in the vehicle and only heat or cool the area around each of them, maintaining comfort while minimising energy consumption.

To showcase the I-PACE’s everyday usability in the virtual world, Jaguar has launched an intelligent app to help drivers experience life with its all-electric performance SUV before even getting behind the wheel. The Go I-PACE app builds a unique picture of a vehicle’s use and will even show how many journeys, if any, would have needed a stop to top-up the battery. The app is free to download and is available now for iPhones: https://itunes.apple.com/gb/app/go-i-pace/id1397794566?mt=8

*All calculations are made with Manufacturer’s figures and average fuel and electricity prices in the UK. Correct at time of publication.

Helston Garages Ltd is an appointed representative of ITC Compliance Limited which is authorised and regulated by the Financial Conduct Authority (their registration number is 313486). Permitted activities include advising on and arranging general insurance contracts and acting as a credit broker not a lender.

We can introduce you to a limited number of finance providers and may receive differing levels of commission from each of them for the introduction. All finance applications are subject to status, terms and conditions apply, UK residents only, 18’s or over, Guarantees may be required.

Carrs of Exeter Limited is an appointed representative of ITC Compliance Limited which is authorised and regulated by the Financial Conduct Authority (their registration number is 313486). Permitted activities include advising on and arranging general insurance contracts and acting as a credit broker not a lender.

We can introduce you to a limited number of finance providers and may receive differing levels of commission from each of them for the introduction. All finance applications are subject to status, terms and conditions apply, UK residents only, 18’s or over, Guarantees may be required.

Both the above companies are registered in England & Wales and have their Registered Office Address at: 85 Meneage Street Helston TR13 8RD Cornwall. Company registration numbers: Helston Garages Ltd 703021. Carrs of Exeter Ltd 2453567l

Registered Office: 85 Meneage Street, Helston, Cornwall. TR13 8RD
Reg. Company Number: 703021
VAT Reg. No. GB447416638
Back
Vehicle Valuation
Compare Saved Vehicles
Top
Close
Your Cookie Settings
Select your cookie settings
Strictly Necessary Strictly Necessary cookies are essential to let you move around the website and use its features, such as accessing secure areas, shopping baskets and online billing. These cookies allow our website to provide services at your request.
Functional Functionality cookies are used to remember the choices you make, e.g. your user name, log in details and language preferences. They also remember any customisations you make to the website to give you enhanced, more personal features.
Targeting Targeting cookies collect information about your browsing habits to deliver adverts which are more relevant to you and your interests. They also measure the effectiveness of advertising campaigns.
Save Settings
Cancel Changes